Trigger warning: emotional and scientific language is used throughout this webpage.

“I have always suspected that self-injury affects males as much as females,” says Wedge, “and I’ve always been suspicious of the media when it portrays self-injury as only a teenage girl thing. I know from my experience that it is not. I started hurting myself before I was a teen, and I hurt myself the most after my teens – I am male, and I’m a confident and fairly decent bloke. I have struggled with difficult things in life though, and I have had trouble dealing with my emotional responses; I turned to SI to deal with my distress, to make the pain ‘real’ and to ground myself, to just cope and get on with things.”

LifeSIGNS has always suspected that bias in research into SI may be responsible for the apparent predominance of females who experience it, and a recent report by M.J. Marchetto* suggests that this is indeed the case:

“No gender differences were observed among skin-cutters, most of whom reported experiences of trauma. BPD [Borderline Personality Disorder] was recorded for a minority of those skin-cutters without a history of trauma. PBI [Parental Bonding Index] scores discriminated between non-BPD skin cutters and non-BPD comparison participants without a history of trauma….Although these results provide further confirmation of a potential association between prior trauma and repetitive skin-cutting, they rigorously challenge the validity of reported gender differences for this behaviour. Further, this study has identified that repetitive skin-cutting can arise independently of BPD and prior trauma. Clinical implications of these results and suggested directions for future research are discussed.”

A cause for bias may be the relative reluctance of many men to seek support for the emotional distress that is the origin of their urge to self-injure. Many men find themselves within a culture that rewards avoiding seeking support, especially medical support, at all costs.

As Wedge explains, “My grandfather did his best to avoid doctors at all costs, no matter how ill he was. I had to think long and hard, for many years, before standing up and demanding support from the NHS.”

In reality, many men self-injure and seeking support need not be a difficult experience. If you are a male who is self-injuring or are feeling the urge to self-injure, you can walk into your doctor’s surgery with your head held high and ask to see a specialist in the area. Remember that you do not have to discuss self-injury with your doctor if you do not feel comfortable doing so, nor do you have to justify your feelings or give him or her a detailed account of your feelings. You have every right to ask for a referral to see a specialist, that specialist may be a Cognitive Behavioural Therapist – someone who can help you with the way you behave and act, or you could choose to speak to a Psychologist or Psychiatrists about how you’re feeling. Don’t be concerned by the word ‘Psychiatrist’ – it just means they are like a Psychologist but with the power to prescribe you specialist drugs, and you might want to listen to any advice they give you about a few month’s of drug therapy; it’s your choice of course.

Read about Getting help from your Doctor

There is a perception that women are better at ‘expressing themselves’ than men, and that men are often thought of as more comfortable coping with their emotions on their own. Despite the evidence that men suffer emotional stress to the same extent as women, it is still culturally expected that men will remain a ‘stiff upper-lip’ and keep their emotions ‘in control’.

And yet we know for a fact that suicide is one of the highest causes of death for men, especially young men. It is incredibly sad that society places such a great deal of pressure on men to remain ‘strong’ that some men would rather commit suicide that consider talking about their emotional distress.

So is SI an indication of weakness?

Self-injury has nothing to do with either ‘weakness’ or ‘strength’, whatever those words might mean. Self-injury is a coping mechanism that allows people to deal with their emotional distress, which, of course, cannot be compared from person to person. It is nonsense to say that a person who self-injures is in any way ‘weaker’ than a person who does not, because their emotional states can’t be compared like height, weight, or hair colour.

Self-injury is not about ‘strength’ or ‘weakness’, but rather about finding a way to cope with overwhelming negative emotions, stresses, etc. Self-injury is a last-ditch attempt to cope with these factors, when the other options appear to be only an inability to function, or worse, suicide.

It is worth noting that self-injury has the potential to affect all men, regardless of age, race, religion, sexuality, etc. Coming out as gay may well be a stress inducing time but self-injury isn’t related to sexuality, and can affect people from all cultures and backgrounds: rugby players, actors, high-powered city executives, teachers, doctors, builders…in short, anyone and everyone.

LifeSIGNS believe that although self-injury is a coping mechanism, there are less damaging ways to cope with emotional distress. LifeSIGNS doesn’t tell anyone to ‘stop’ self-injury outright, but we do believe that over time many people can find alternative coping mechanisms and we endeavour to support people as they do so. A person will only be able to move away from self-injuring once they have found a different and more effective way to cope.

If you feel the urge to self-injure, it is easy to feel powerless and worthless if you are not in control of your feelings or choices. LifeSIGNS is here to help you find less damaging ways of coping, so that you can beat self-injury.

Try searching the LifeSIGNS website for information about harm minimisation; get support from our Support Forum; read ourMale SI Factsheet; go to the library and borrow some self-help books; go for a jog; play some loud music – all of these things may help you.

We can beat self-injury – together.

Get more support from our Support Forum, we have plenty of guys who will welcome you. 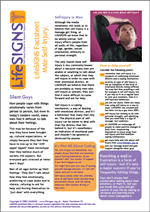 Guys might hurt themselves in different ways, and they might avoid talking about self-injury, but it’s not uncommon among men, and you should not assume that self-injury is a ‘girl thing. Download our Factsheet for your mates – it’s def not a girl thing.

Visit our publications page to download and save / print our Male Self-Injury Fact sheet.

Open / download our Male Self-Injury Poster [PDF; 335KB]; ‘right-click’ on the link and select download or save.

Cricketer Ben Stokes talked about punching lockers – would you recognise Ben’s behaviour as a form of self-injury? Can you see yourself in his story?