Here at LifeSIGNS, March is Tell Someone Month. 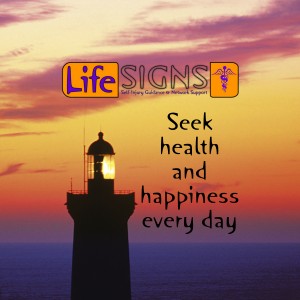 Throughout March, we will encourage and support you to ‘come out’ to someone about your self-injury – it could be a family member, friend, GP, counsellor etc.

As a bonus of being brave and telling someone, if you send us an email telling us who you told and how it went, we’ll post you a badge to say well done! How’s that?! A super cool badge showing the LifeSIGNS logo and our ‘seek health and happiness’ motto.

Read more about Tell Someone Month on our website and how to get an awesome badge for free :)

To start it off, I thought I’d share my “coming out” story.

Imagine the scene – it’s New Year’s Eve, you’re in a crowded pub and your new partner leans over and asks “how did you get those scars on your arm?”

I managed to put him off by saying it was a long story and I’d tell him another time. Luckily, he was drunk at the time, so promptly forgot the whole conversation. It did make me realise though that I had to tell him.

I picked a few weekends later and decided that’s when I would tell him.

I was petrified. We’d only been dating a couple of months and I was scared of losing him. I also knew if I wanted our relationship to last, I had to be honest and open with him.

He already knew something was on my mind because I was had been very quiet and pre-occupied that weekend. He asked me what was wrong and all the things I’d rehearsed in my head went out the window and I blurted out “I did those scars on my arm.”

Turns out he’d seen them on our first date and was waiting for me to be ready to talk about it. Over a cuppa I let him ask questions and I tried my best to explain what had led me to self-injure. It was going a lot better than I’d ever imagined.

He hadn’t rejected me, he hadn’t broke up with me; he was listening and trying to understand, while reassuring me it was all okay and that he still loved me.

Then he said, “but you don’t do it any more do you?” I froze. I was okay talking to him about it in a past sense, but hadn’t want to let on that it was present thing. I somehow thought I could keep that bit from him and it would all work out. Somehow.

My silence told him the answer though, and the pain I saw in his eyes almost broke my heart. He didn’t ask me to stop, though I’m guessing he really wanted to. He did ask if I would tell him when I felt the urge and be honest with him about when I had self-injured. He also reached into his bedside drawer, showed me a packet of his anti-depressants and asked if he could take me to my GP.

That was my turning point. Not just with self-injury, but with the reasons behind my self-injury too. Things were going relatively well for me and I still felt the need to self-injure. Why? I realised that instead of my on-off battle with depression and self-injury, I needed to face it head on. So yes, I let him accompany me to the GP and let my recovery journey begin.

I could not have done it alone though. Even with all the encouragement in the world from the forum at LifeSIGNS, I would never have plucked up the courage to visit the GP on my own and ask for help. Telling my boyfriend, (now my husband), is one of the best things I ever did.

Visit our website to find out more about Tell Someone Month and how to get a LifeSIGNS badge as a ‘well done’.

Depression, from family, through studies – by StevenI’m a volunteer (Wedge)

Focus on what you *can* change