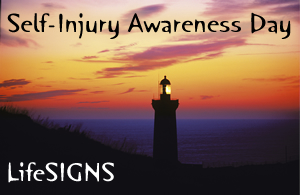 Self-Injury Awareness Day (#SIAD) on March 1st is a brilliant international initiative for raising awareness about self-injury. It’s a chance for us to combat some of the negative stereotypes surrounding this misunderstood coping mechanism, because, let’s face it, self-injury usually gets a bad press.

Most people have little awareness or understanding of the problem, even though statistics show that it is something most people will encounter at a personal level – through a classmate, a friend, a colleague, a friend’s son or daughter, a relative, someone in your community, yourself.

When people encounter self-injury for the first time, they might think: ‘He must be mad to do that to himself.‘ ‘She just wants attention.’ ‘He’s messed up.‘ ‘That’s crazy.’ ‘But she doesn’t have any real problems.‘ ‘That’s something teenage girls do.’ ‘She’ll grow out of it.‘ ‘He must be dangerous.’ ‘That’s really weird.‘ ‘How can you do that?’ ‘Gross.‘

These are, of course, human reactions to something we have no knowledge or understanding of, and to something which does seem strange to anyone who hasn’t been in that position. I mean, we are talking about purposely hurting oneself in order to cope with difficult emotions, to feel better, to reconnect with the world or something else (different people have different motives).

For the majority of people, making yourself hurt physically to take away emotional stress or hurt just doesn’t make sense.   However, many of the reactions above are borne out by misconceptions that are commonly bandied around. It’s important to realise that self-injury doesn’t make the person crazy or dangerous, and neither is it usually something done to seek attention from others. Most self-injury takes place in secret, hidden from view even for years, and it affects men and women.

Most people who resort to self-injury are normal individuals who have been driven to breaking point by difficult circumstances or things that have happened in their lives. The last thing they need, at that point, is to be judged by people who haven’t been in that position.

If you know someone who self-injures, or even if you don’t yet, please take the time to read some of the articles on LifeSIGNS – there is a wealth of information from people with personal experience that can help you to move closer to understanding. But most of all, have some compassion. This is a time when you can really show that you care, and sometimes just being cared about is all that is needed to make one day just a little bit better.