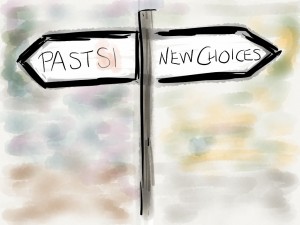 It started for me when I was 11, except, back then I had no idea there was a name for it. I just wanted the merciless bullying I’d received to not hurt anymore, and it allowed me a degree of control; I could control the pain I felt, how much I felt and when I felt it. Somewhere along the way I could control whether I felt at all. I only saw it as a problem when the method became the only way I could feel. It wasn’t in control anymore, it was controlling me.

For ten years, I relentlessly battled the demons that led me to self-injury, and then self-injury itself. It’s hard to believe that for more than half of my life, I’ve been fighting in (what I like to call) the ‘War of my Mind’. Only now, I feel like I’m on the right side of it.

I’d love for it to be like a fairy-tale, that I can say these past four years have ‘fixed’ me completely. I’d be lying if I said they had. There are still times where I feel like taking control of my life the only way I’ve ever really known how.

Every time I manage to overcome an obstacle without giving in to my most basic instinct, I allow myself to paint a new layer of strength on to my ‘Wall of Power’. The Wall of Power being the name I gave to my newly found determination, the thicker it is, the more confident I am in resisting the urge.

Honestly, that wall started with less than a single brick. I built its foundation at rock bottom, but I only went up from there.

At 20, I’d lost a friend to suicide and my boyfriend of three years to drug addiction. I was lost in a sea of pain, self-injury seemed the only way I could deal with it. It got so bad, I look back with sadness for my hurt self. At 21, my hurtle towards suicide made me admit I was out of control.

The start of my healing came via creative writing. I was too ashamed and afraid to talk about what was happening so I put it onto paper instead. It was long, and it was tiring but the years of clandestine written confessions started to smooth over some of the cracks, and slowly led to me confiding in a small group of people.

It was at the end of 2012 when I decided to live by the motto, ‘Uncomfortable truths will set you free.’ I’ve been allowing myself to talk and write about things I hadn’t uttered to a soul before. It feels like now, my true healing can begin.

If I could offer any advice it would be to find your own ‘voice’ in whatever format you wish. My writing gave me the stability and release that self-injury never could. Although it comes with pain, it’s cathartic, far less physical and more likely to leave you without visible scars.

I know sometimes it feels like you’re the Titan Atlas, with the weight of problems crushing your shoulders, but you should know that while you’re gasping for breath underneath the world, there’s the endless possibility to be on top of it too.

Oh (says Wedge) our SI Awareness wristbands are again available to purchase, in time for SIAD!

Preparing for #SIAD – what to doFresh starts and commitment